THE ORDER OF MASS

The “Order of Mass” is based on the Roman Missal. The basic structure of the Mass has four parts: two main parts and two framing rites, the four parts are called; The Introductory Rites, Liturgy of the Word, Liturgy of the Eucharist, Concluding Rites. Click on the link for each part, to read details about how the mass is served at St Dominic Savio Church. 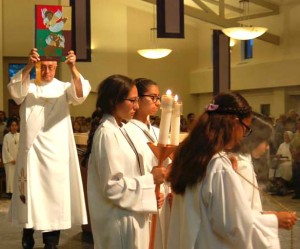